Still no sewing. I have a pattern cut for me, but I just can't find the time to sew anything. Not that it matters, as I have lost a whole 4 ounces since the last doctors appointment (which was 3 weeks ago), and I can still wear my maternity clothes with wild abandon! Weee!

So, i'll post pictures of the Little Miss instead! YAY! 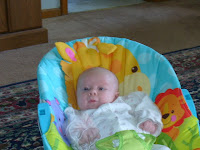 Here is a picture of Rachael and Suzanna. 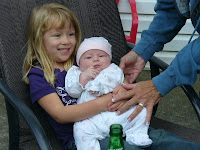 And now a picture of my husbands birthday cake. It was funny, because a neighbor brought a ton of cupcakes over, and I felt bad because I had to hide them. I spent so much on the cake, I didn't want people to fill up on cupcakes before I got the cake presented. (the cake was a surprise) 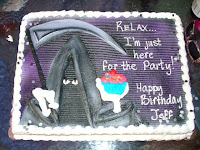 Other than that, nothing new. Hopefully next time i'll have a shirt, or at least some handmade rags to post about! lol
Posted by Tina at 1:30 AM 1 comment: 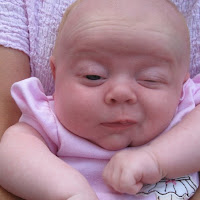 I'm really working on getting some sewing done. I'm actually making some progress. I was able to make a Helo Kitty tote bag for my oldest daughter. One yard down 999 to go... Apparently, the school really would rather the kids have tote bags and not back paks because they're easier. Fine with me because I didn't get DD a backpack this year. However, plenty of other parents did, because there in nothing but Hanna Montana backpacks as far as the eye can see during the kindergarten lineup.

I have a few patterns cut. One was a bunting pattern for my baby. Unfortunatly, I cut it out about 10 days ago. At the rate she's going, she'll be able to fit it for the next ten days or so. Sigh. Guess she's not getting a bunting.

I have a pattern cut for ME!! Wee! Simplicity 2774. I really need clothes, and hopfully this will get my sewing mojo going again. Besides, i'm getting tired of being LAME...

I did buy 10 yards of flannel to make buntings, jammies for the oldest kid and a gift for a nephews and his wifes baby shower. BUT, well, yeah... i'll get to that, eventually.
Posted by Tina at 9:45 PM 1 comment: