Project Runway is on! YAY!

DH is watching something, so I gotta wait my turn. I have a tv down here I could be watching on, but I refuse to sit through commercials. And the tv down here isn't a DVR box.

(I apologize for the weird spacing.)

Congratulations Andy! Sorry Gretchen, but your crap in in the bottom three this week.

So, Heidi decides that she wants some cheap labor, and she's going to get it with the PR cast. Hell of a business woman, if you ask me.

When the challenge was presented Heidi says brightly "I'm providing you with some fabric, and you can also buy some other fabric". I didn't write that wrong, she actually said that.

In this episode, it appears that the cast wasn't happy with Heidi's line, with her fabrics, with her being on the workroom floor, with her critiques...with each other. What really kills me is that they aren't all that happy with the line, but you could bet not a single one would turn down the opportunity to have their item in that line (Free labor and all!)

Mondo rolls his eyes at Heidi...

Oh no he didint!


Then the commercial comes on...Cats are getting appetizers now? WTF!??

After the commercial, it is announced that 'the past' will show up. The past shows up in the form of 6 previous losers. One of those losers is Bitchface, Oh, I mean Ivy. 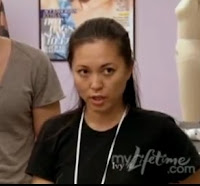 Bitchface is pissed because Michael C. is still on the show. Ivy says "He is holding a spot that could have been Valerie's, mine and Michael Drummonds". Yes folks, Michael is taking up 3 spots. Maybe he is three people? I don't know. Who cares.

Also, she believes in karma. Then promptly gets a needle to the eye.

So, now it's runway day. Heidi tells the designers that there are 6 of them left, soon there will be 5. This is in case any of the designers forgot, and to remind some of the less advanced audience members that 6 minus 1 equals 5.

Andy sends a ripoff down the runway... 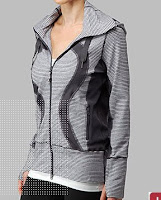 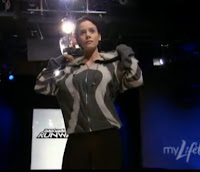 We seen what you did there 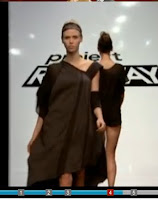 I'm sorry, BUT THIS IS NOT FUCKING ACTIVE WEAR!!! Look, I like April. She seems like she's a nice girl, but I just don't get the appeal of her designs. It looks like lingerie you would were if you wore lingerie to a funeral.

Then comes Christophers stuff. I couldn't get a clear screenshot of the pants, so you get nothing. But I really liked his pants. Doesn't matter, I guess. *Shrug*


And also, next time one of you PatternReview people get so hung up on wavy hems on your knits, remember that Project Runway contestants are churning out lovelies like this. 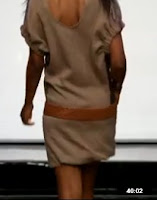 I thought Mondo should have been the winner.

So, Gretchen, Michael and Christopher are in the bottom. So therefore, Andy, Mondo and April are on top.


Gretchen says that shes surprised she's in the bottom because she made 10 pieces in TWO days, and they're good! (You know, just like everyone else.) She's also shocked that Mondo is in the top because she feels like he really only made one look. Keep your eyes on your own paper, bitch! 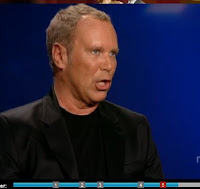 What is this in the crotch? These pants look like they've been washed and worn a few dozen times. (These are Christophers pants, BTW.)

Gretchen actually tells Heidi that she doesn't really have anything sophisticated in her line! LOL Heidi counters with a frown! 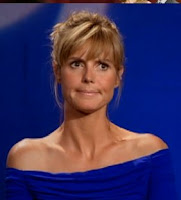 So anyway, Andy wins the challenge. Good for him, I think he deserved another win...just not necessarily with this challenge.

Christopher is out. Personally, I think it was his time. He seemed like a nice guy, but his stuff really was just 'safe'.

Bye-bye, little brown haired girl. She seemed like a wonderful person, I just didn't see anything that gave me any type of reaction. While I was no big fan of Ivy, I thought she was the better designer. I'm still a bit suprised that Ivy went home before her too. Of course, I know jack about high fashion, so I can be way off. Of course, the judges could have just wanted to get rid of her because she was so bitchy and willing to throw people (Micheal D.) under the bus. Eh, who cares, she wasn't going to make it to the end, anyway.

That will leave April, Andy, Gretchen, Michael and Mondo.

I would really like to see Mondo, Michael and Andy in the top three, although, I doubt Gretchen isn't going to go down without a fight. April I really can't see in the top three because all her stuff looks the same to me. Morgue lingerie. Of course, once again, I know jack about high fashion.

Can someone explian to me why Micheal Kors always has a stupid look on his face? Really, he looks fucking misreable -- ALL THE FUCKING TIME! 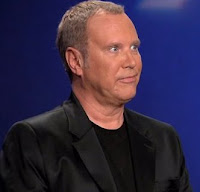 Anyway, I can't wait for next week. Hopefully we will finally find out who's cheating. Although, I have a feeling that's just footage of Gretchen accusing Micheal of stealing her fabric color, and the actual footage just wound up on the cutting room floor. We'll see.