Yesterday was my birthday! Happy birthday to me! Hubby got me a popcorn maker which i've been begging for for like, forever.
Then we went and had a big fat steak at the steak house. Yumm!

So, I went to make S3775 for the second time. I originally made view D a few months back. This time I decided to make veiw A, because I wanted a longer sleeve. When I went to cut the fabric for the dress, I see that there are two different sleeves, with two different caps. Hmmm. 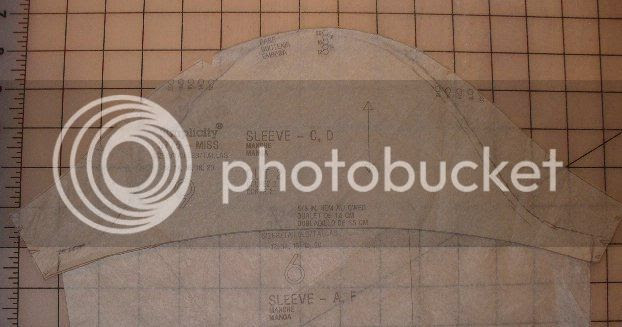 Why is that? I ended up just extending the sleeve from view D, and the sleeve fits fine, and there doesn't seem to me a lot of extra ease because of it either. The bodice pieces are the same, so I can't see why the pieces are different. Any ideas?

Oh yeah, here is a pic of the finished dress. I just love the fabric!

Merry Christmas! Hope you all are having a wonderful holiday!

The kid got more crap than she knows what to do with! I thought I was done shopping for her a few weeks ago -- like before Thanksgiving. Anyway, for the last 5 weeks, all she's been talking about was getting an accordian and an easel from Santa. So, guess who was out 3 days before Christmas buying an easel? Yep, me. So, she's happy, and now we can just sit around being over fed, and happy.

Hope yours are a good one!
Posted by Tina at 4:35 PM No comments:

In this group, you can either trade, or buy patterns from other members. If you have patterns you need to get rid of, I say this would be as good as place as any to start.
Posted by Tina at 11:12 AM No comments:

Well, since I know that there are plenty of you visiting my tiny blog (thanks Fark). I figure a few of you might have an opinion (unpossible!). I may be moving across country soon, and I need a mover. I've read so many horror stories about how people were quoted a price of $1500, but then told because there was an underestimate of stuff that was to be moved, it's going to actually cost $5000. This is apparently after they have your things on their truck. I can't afford for this to happen. And U-haul is not an option for me.

Please, if you have any expierence with this, or know someone who has, please leave a comment.
Posted by Tina at 12:08 PM No comments:

Over the weekend we took Rachael to go see Santa. We go down the GM RenCen in Downtown Detroit. We go there because it's never busy. Which I find suprising because they have a pretty good setup there AND it's FREE! (I can't figure out how to fix my pictures. Google is croping them, if you click on the picture, you can see the whole pic) 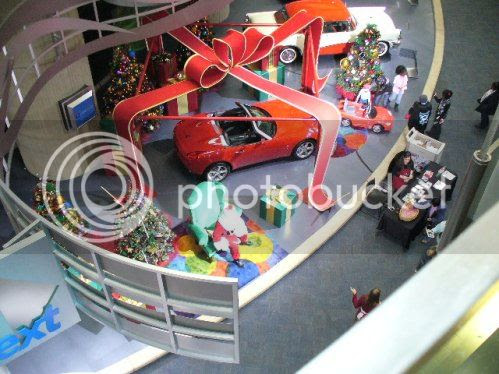 My daughter is 4, and she has yet to sit on Santas lap. She's not having any of it! lol For a month, she has talked of nothing else. She was going to ask Santa for a accordian and an easel. Well, here is the inital meeting... 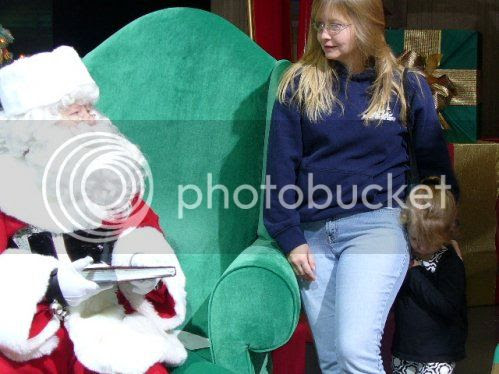 After much talking and showing of Dora the Explorer stickers, we managed to get ONE picture of Rachael without one of her parents in the picture.This was short lived though as she quickly realized that I had stepped away. 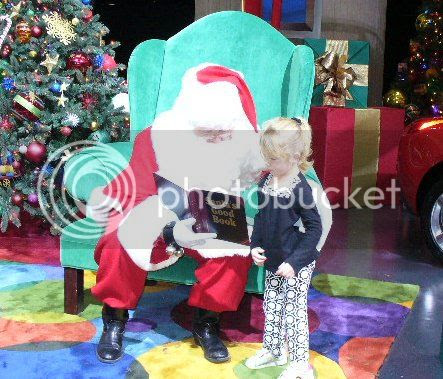 The one thing I really like about Santa at the RenCen is that it's not busy, so Santa is able to give a little one on one time with the scared kids. This is where Rachael was able to tell Santa of her Christams present wishes. 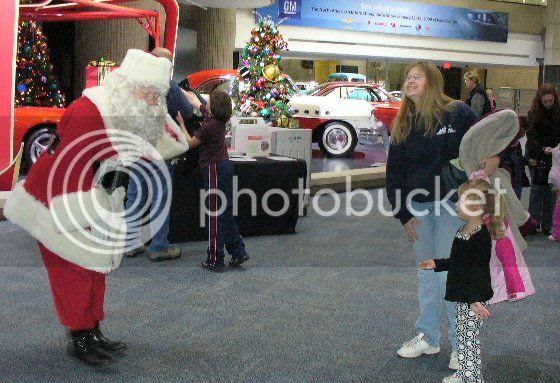 I still don't think she's buying it though. Look at the look on her face! lol 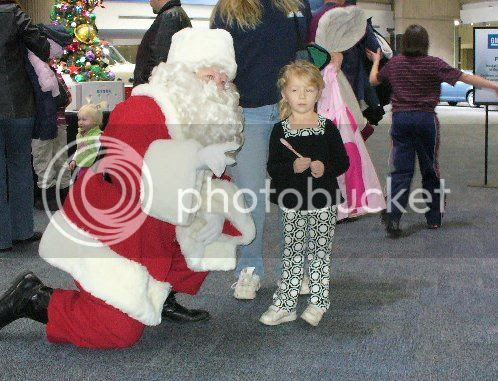 The funny thing was every time I would back up an inch to try to remove myself, she would back up right with me. These pictures are exactly the same from the last two years. It's weird because my kid is really outgoing. I guess I should be thankfull that my kid isn't so gulliable that she'll sit on a strangers lap.

After Santa, we went to go see The Polar Express at the IMAX theater at Greenfield Villiage. I highly reccomend that if you have small children. I was afraid she would be afraid of it, and she was at first, but she loved it. I highy reccomend The Heney Ford Museum and Greenfield villiage if you happen to be in town. There isn't a lot to see in Detroit, but Greenfield Villiage is one of the few things we have.

As for sewing, well, I have to admit, i'm not really in the mood. I did manage to cut Simplicity 2774 View C But when it will get sewn, I have no idea. I have a ton of embroidery I need to do for Christmas presents and we still haven't got the tree up! I'm just not on top of things this year.

Well, now that the family has been told, I can finally announce it to the world. I'm pregnent! Wee!

In May, I had a miscarriage when I was 18 weeks pregnent. That was hard to take. But so far this pregnancy seems different already even though i'm only about 6 weeks along. With the last one I had a lot of pain right from the begining, not so with this one. As a matter of fact, I don't feel anything at all. Well, I'm really tired all the time, but other than that, nothing. I'm trying to decide if I want to document the next 8 months or so with pictures. Posting pics of my big belly makes me rather nervous. lol
Posted by Tina at 1:33 PM 1 comment:

Norton apparently got it's act together. We can now enjoy the interwebs again....
Posted by Tina at 12:11 PM No comments:

Yes, well, when I created this blog, I had no intentions of posting recipes. However, last night I accidentally made a soup that turned out so good that I figure I just have to share it.

[*NOTE: spices are approx. estimates. I don't cook with actual measurements, but this is about how much I use. Taste the broth after it simmers for about 30 minutes to see if you need to add more]

When beef is thoroughly cooked add all the soup ingredients EXCEPT quick-cook barley and peas. Bring to boil. Reduce heat, cover and let simmer for 30 minutes stirring occasionally.

Add barley and peas. Cover and let simmer for 25 minutes.

Serve with a hearty bread. Yumm!
Posted by Tina at 12:30 PM No comments:

About a year ago, I bought a embroidery machine. I bought a Janome MemoryCraft 300E. This machine gets great reviews, that's why I bought it. I bought it used, and it still wasn't cheap. Anyhow, they don't tell you there is a learning curve to embroidery. I am still having problems with my technique, although it's getting better.

I have Embird sortware with their font engine and digitizer. There is a learning curve with that too.

Anyhow, most of my problems have to do with lettering. I couldn't get a decient letter sample until about a week ago. I'm still not sure what i'm doing right to improve my techniques, but something is working.

So far, I am trying to use the rubber shelf paper in the hoop. Technique from embroidery Library..

I've been through a half dozen different stableizers. And so far the best options have been to use a medium weight on the bottom and some sort of sticky tear away on the top. Although, anyone who has ever used tearaway on the top knows it can be a real bitch to get all that paper out of your design.

I bought some wet-n-set from JoAnns a while ago.(not to be confused with wet-n-stick, which I have never used) This stuff is terrible. It holds like cement and you can't get it off of your design.

I just ordered 5 yards of water soluable from
ThreadArt.com I should be getting that in a few days. However, I may not always what to get everything I embroider wet to remove the stableizer. So, i'll be looking for another method as well, I suppose. Suggestions are always welcome.
Posted by Tina at 10:46 AM No comments:

So, three days ago, I decided to quit smoking. The first two days went well with no cigarettes, I had two today. :( It could be a lot worse, hubby has left a pack of smokes laying on the counter for the last three days, and I didn't get tempted until today. Go me! I'll be drowning them tomorrow if he doesn't hide them.

My most recient sewing project is McCalls 3830. A pencil skirt. I got the zipper in and tried it on. Looks great EXCEPT that it really tight and I haven't got the darts in it yet. Looks like this one is going to be a wadder. Which sucks because I used some of my better twill. Bummer.
Posted by Tina at 11:49 PM No comments:

So, I made a cat bed for my cat. I make these every now and again, because they're easy and cheap to make. Plus, the cats love them. They take about a yard of fabric, and I normally use the box that bottled water comes in as the base. I decided I would document the process here for your entertainment.


Step one: Cut a piece of fabric that will fit all sides of the box that you have. 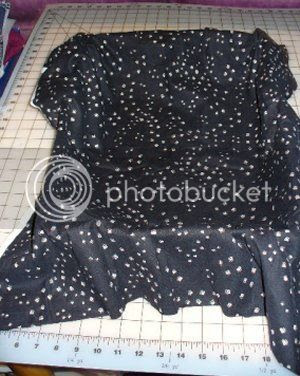 Then serge elastic around the edges. Stretching well as you go. 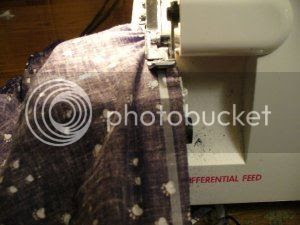 Smack the cat in the head...repetedly...because she's chewing on the elastic. 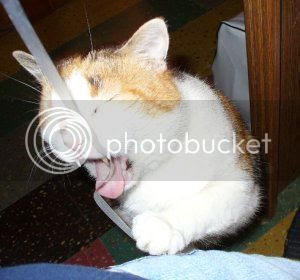 Get attitude from cat. 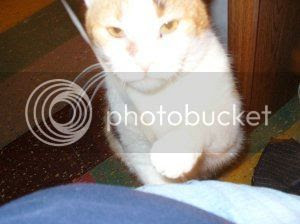 Add fill of your choice: 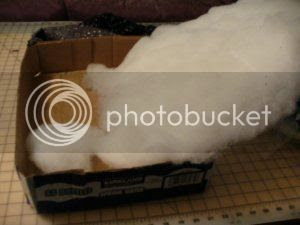 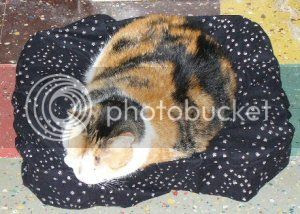 She sits there naked because I have no love for her. I'm noticing something strange as I read other blogs and read reviews on Pattern Review. People NAME their dressform! WOAH! I even saw a picture of a dressform all dolled up for the Thanksgiving holiday! So I thought, 'how cool is that'?

Then I started feeling bad for my dressform. There she sits, all naked and alone. Not even a cheap muslin to keep her warm in my rather cold basement. How sad! So, I sit here and think about naming her, but i'm completely drawing a blank. Not even any ideas for rejected names.

I'm interested to know what you call your dressform. How did you come up with that name?