One thing I don't normally have a problem doing is spending money on stuff that I don't need. However, I think 2011 might (might!) be a new year for me. So, ok, i've already bought a half dozen european pattern magazines I don't need, two Hot Patterns and a Jalie. OH! And lets not forget the Kayla Kennington pattern I didn't need, and probably won't make because if i'm reading the envelope correctly, this project takes 11 1/2 yards of fabric! Yuck!

So, here I find myself eyeballing these cute Trudy Jensen patterns. I really like the Wrap Coat: 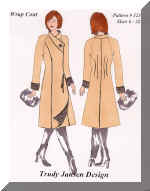 and the Designer Denim Dress: 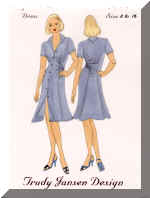 So, here I am actually contemplating NOT buying something. I'm not so sure how that's going to work out, but I think i'm going to wait a few days to see if I still want it as badly as I do now. I'll update you on Wednesday!

I'm going to make my FNSI post now, just in case I can't get to it over the weekend.

One of my biggest sewing 'fears' is welt pockets. Well, this pattern has welts. I have one front done so far, and I gotta say, it doesn't look bad. So ok, it's not great either, but at least it looks like a welt! lol Of course, I also have 3 more to do on this pair of pants too. There is a lot of room for error with 3 more pockets to go!

I would also like to mention that I am going to be using Sandra Betzinas easy, fly front zipper technique for the first time. It's looks far to easy to be true, but it's worth a shot!
Posted by Tina at 10:27 PM 3 comments:

So, i'm trolling around eBay looking for someting, and I came across this! I have never seen this before, and there is next to nothing on the on the internet.

Naturally, I bought a copy. I mean really, there must be worse things I can spend $16 bucks on, right? (You're also welcome to see yestrdays post about my new found love of pattern stashing).

I'll post pics as soon as I get the magazine. It's coming from Germany though, so I could be a few days.
Posted by Tina at 6:34 PM No comments:

A girl's gotta stash something!

For the last few months I haven't been very interested in fabric buying. The more I think about about that, the more i'm starting to realize that it's ok to not buy everything I like. Don't get me wrong, i've bought about 8 or 9 yards already this year. But i've already sewn 4 of what i've bought, and i've sewn another 8 yards, for a total of 12 yards out already. These are promising numbers for me! Now if I can keep this momentum up, i'll be good.

HOWEVER, yes, you knew that was coming. I've always heard that usually when you drop one vice you pick up another. SO true! Now i'm buying patterns. This typically isn't an issue for me when they're the $1 JoAnn special. This isn't the case right now. So far this year i've already bought probably 20 big 4 patterns but i've also bought 2 Hot Patterns, one Jalie and one Kayla Kennington pattern. (Isn't it beautiful!?) These are pricey patterns. That wouldn't been an issue if I sewed (is that a word?) every pattern I bought, but chances are, the pattern is just going to wind up in my stash, never to be seen again.

I won't even mention the January La Mia Boutique i'm pinning for.

Now, I will say though, and this is mainly for my own personal record, I bought the Jalie and Kayla Kennington pattern today from Sewingpatterns.com. I really didn't want to because i've read so many bad things about their ship time, but the price of the KK pattern was $12 cheaper than anywhere else, and PR was out of the Jalie pattern until next month. Hopefully I won't have to wait long for the patterns. Beacuse, yanno, i'm in a big hurry to bury them in my stash!
Posted by Tina at 10:15 PM No comments:

In case you are in the Charlotte, NC area, me and a few other ladies from PatternReview are getting a sewing group together. You can get more info here Charlotte area sewing thread on PR . Even if you're reading this long after it's been posted, feel free to join in.

This is not a formal group. We don't have any structure or planned group projects. Normally you would just bring whatever project and suppiles you need and then just enjoy the company. I'm finding that room space isn't cheap in Charlotte, so the cost of whereever we are is split among whoever shows up that day. We will probably meet on Saturdays about once a month, or so. The location will probably be in Denver or Huntersville.

Friday Night Sew In for this month is January 21st.

I have lots of stuff to work on.

I have a pair of Vogue pants cut and ready to go. The only problem is they have welt pockets, and I FEAR welt pockets.

I also have the fabic for a 'skirt' to go around my sewing table. I need the skirt so I can hide all my crap under the table. After all, my sewing room is in the living room now. I'm a bit bummed that this fabric won't count fromt he stash contest on PR, but oh well, I need the skirt.
Posted by Tina at 4:42 PM No comments: 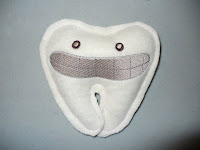 I have a 6 year old that's going to lose a tooth any day now. Well, actually, I think it's pretty much all the way lost. Now all she has to do is pull it from the thin piece of skin that it's still attached to and THEN it will be lost.

If you have young children that are about to lost some teeth, an embroidery machine and an hour to spare, I really recommend this little pillow. He is sooo cute and really easy to make.

Here is a link to the design. Urban Threads Tooth Fairy Pillow
Posted by Tina at 9:22 PM 1 comment:

I don't know what you would call it...

...But I think it's a sewing room. Possably. I'm not feeling it.

This room is supposed to be my sewing room / kids playroom. I think the options are endless, I just don't know what to do with it. I feel bad about that too.

I think part of the problem is 1) It's the first room you see when you walk into the house. I don't mind having a few toys about, but I don't want a lot of clutter in that room. It needs to stay neat, and for some reason, I don't know how to do that. I'm not a hoarder by any means, but I have a tendancy to not 'see' clutter until it's out of hand. 2)We're a bit strapped for cash, so the $1500 armoire is out of the question. And so is the cute sewing desk and cabinet. *sigh* 3) Everything is this house is white! It's so steril. And since this is a short term rental, painting is out of the question.

Anyway, here are a few pics. I have a microwave stand with a tv on it. It's going into that room and i'll probably hook up the Wii on it. And i'm thinking about one of those big fat Ikea chairs. Maybe a small area rug, curtains and some kind of cabinet, and then maybe I can feel at home. 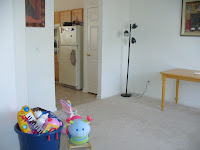 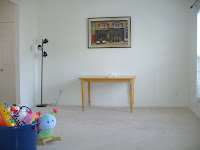 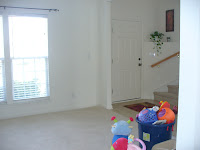